It was hard to catch Andrew for this interview. As you all can relate, he explained, “Four days of calm, then a million things at once.” I can’t actually imagine Andrew getting too frazzled though.  I’ve known Andrew for a few years now and he is always the picture of calm. After talking to him for a few minutes the first time I met him, not only did I realize he was whip-smart, his face lit up when he started to talk about his wife and kids. A great guy with a lot of knowledge to share. Read on to hear his story and how he implements SPEEDlabel® in his shop. 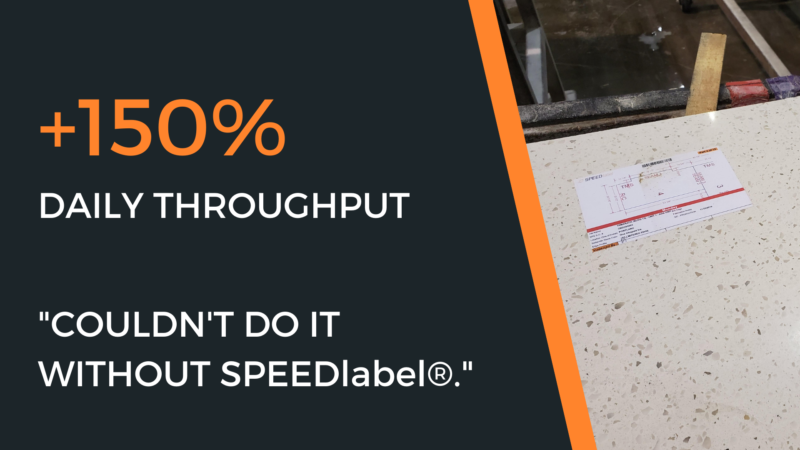 Oftentimes, you end up right where you were supposed to be, even though the road there took some unexpected turns. In 2013, after working for over 10 years in private equity, the firm he was working for, which specialized in buying, growing and selling companies decided to move from Utah to New York City. The big lights and bright city wasn’t necessarily calling him or his young family, so he decided to stay in Utah and look for his own company to buy, grow and sell. He met his future business partner, Roland Scherbel who was running Accent Countertops for its previous owner, Fetzer Architectural Woodworking. Fetzer had expressed an interest in selling the company and for several months Andrew and Roland worked on a plan to purchase Accent and subsequently grow the business. In May 2014 Andrew and Roland bought the business and haven’t looked back since.

Andrew had successfully grown companies before and this was his goal for Accent as well. They went from doing 10-12 jobs a day to their current throughput of about 30 a day. He attests he couldn’t have grown so quickly without SPEEDlabel®. When I asked him what his team liked best about using the labeling system he simply answered, “If we took these labels away, there would be a coup.” This is a great compliment to us of course, but we’re curious, just how he was using labels and why was his team so dependent on them?

I think part of this can be answered in his recent exposure to having pieces without labels getting shipped into their shop. They were recently purchased by a larger company in the Seattle area and they have been receiving jobs from other shops owned by the parent company. Andrew said that finding and organizing the pieces from these shops has been challenging and makes them realize how far the labels have brought them in their organization. 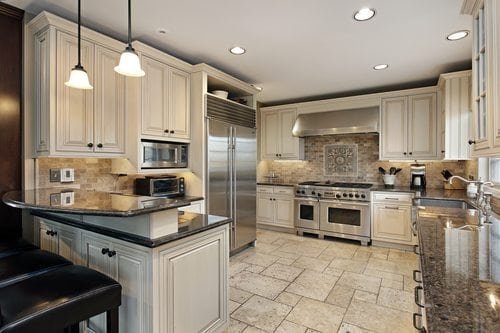 Accent also has a Reno satellite office which is an 8 hour drive from Salt Lake City. The labels make it much easier to ensure that the all the pieces for the jobs are on the trucks heading to Reno. This double check of piece count saves so much time and labor as missing a part is costly when you can’t return to the shop within the workday.
Accent’s biggest advantage of using the SPEEDlabel® system was finding and fixing mistakes during fabrication. So much so, he won’t run his shop if he can’t label his parts. (They once ran out of labels and panicked until he received his overnight shipment!) Now he can’t imagine looking at a table with pieces on it and having no sense of their origin or what needs to be fixed. His team sees the job, piece number and what exactly was wrong with it. What job is this piece tied to? Did the CAD team add the wrong overhang? Did the polishers polish the wrong side or did a piece break in transit?

TIP: Accent highlights pieces that need to be fixed in red. This way, they know it gets first priority and gets rushed on the production line.

Knowing the origin of the mistake is incredibly important when running a business and making process improvements. If the label says a piece should be 32 inches and they measure it to discover it’s 31 inches, the troubleshooting process starts right away. This can help you start to identify the cause of an issue immediately so that additional material or time isn’t wasted.

As we mentioned in our previous blog, Andrew also notices that the installers benefit a great deal from the labels. It gives them more confidence in the accuracy of pieces in their job and also helps load their jobs in an organized fashion.

We are so grateful for our customers like Accent Countertops, who have become invaluable in their feedback. As Andrew had mentioned, in the fabricating world, some of our days don’t run as smoothly as others. Our mission has always been to make the life of our fellow fabricators easier and we thank all of you for trusting us to make that possible.